Join us on Telegram... Members 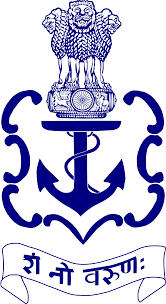 About The Company:  The Indian Navy is the naval branch of the armed forces of India. The President of India serves as the Commander-in-Chief of the Navy. The Chief of Naval Staff (CNS), usually a four-star officer in the rank of Admiral, commands the navy. The Indian Navy can trace its lineage back to the Honourable East India Company’s Marine which was founded in 1612 to protect British merchant shipping in the region. In 1757 the East India Company established its rule over much of the Indian subcontinent, but it wasn’t until 1830 that the colonial navy became known as Her Majesty’s Indian Navy.

Desired Candidate Profile for this job: Online applications are invited from Unmarried Male Indian Citizens and subjects of Nepal and Bhutan.

Procedure to apply:Interested  and eligible candidates apply this position in online latest by 5 June 2016.Print two copies of the online application form. One copy duly signed, along with attested copies of matriculation certificate, 10+2 marksheet, domicile certificate, NCC Certificate (if held) & one self addressed envelope of size 22×10 cms with Rs 10/- stamp affixed on envelope is to be forwarded at address mentioned in official notification.Last date of receipt of application – 13 June 2016

Apply for Over 1000 active jobs every month Only for B.E/B.Tech Graduates:- : Register Now!

Only 3% of resumes pass the initial application. Be in 3%. Create your professional resume at Rs.149

ITBP Recruitment Of Freshers As Constable For 134 Posts

TSTRANSCO Recruitment Of Freshers As Asst Engineer For 330 Posts

Bank of India Recruitment Of Any Degree Graduates For Faculty Position

ISRO Recruitment Of Freshers As Technician Apprentice & Diploma For 12 Posts

AAI Recruitment Of Freshers As Junior Assistant For Any Degree Graduates

IPR Recruitment Of Freshers As Apprentice For B.E/B.Tech/BCA/Diploma/ITI

JOIN THE ELITE GROUP OF PROFESSIONALS